There is no summer respite for Franck Cammas and Norauto: summer is the peak season!

For some, the summer goes hand in hand with relaxation, beach and cocktails. For the skipper and European leader in car maintenance, it implies challenges, hard work and a high level of performance.

It is in the bay of Palma from the 1st to the 4th of August that the Team France crew will be giving it their all against seven other teams in this circuit for experts.

The five sailors aboard the GC32 Norauto will have to keep a close eye on their adversaries: the Swiss team Realteam, second in the championship, and winner of the circuit in 2017, and the other French team Zoulou, which Franck Cammas knows well since they shared the last America’s Cup campaign. Newly arrived on the circuit, the British skipper Ben Ainslie and his team INEOS have shown good progress and have no intention of playing a secondary role.

“I am already familiar with the bay of Palma, for having sailed in the Nacra 17 (Olympic catamaran). There will probably be less wind than in Lagos (Southern Portugal, where the previous event took place), so the races are going to be fairly tight. The aim is to confirm our victory of last month and to win this new GC32 Racing Tour event. We will be competing against seven equally highly determined crews”, commented Franck Cammas.

At the end of this 37th Copa del Rey MAPFRE, the trophy will be awarded to the winner by the King Felipe VI of Spain in person. 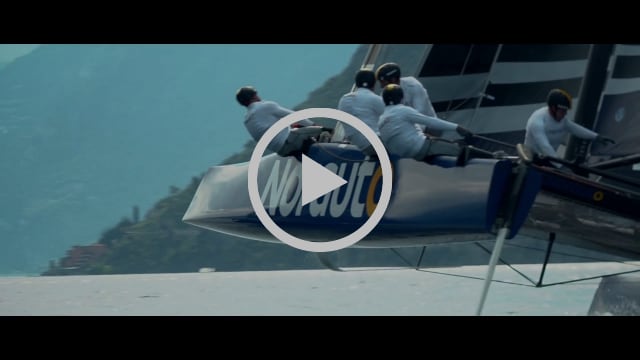 Partners:
In addition to being a partner of the GC32 Racing Tour, the German brand Marinepool is joining Franck Cammas’ team as official supplier for this season 2018.