The first GC32 World Championship has just come to an end in the dramatic setting of Riva del Garda, located on the shores of Lake Garda in Italy. The best sailors in the world coming from 10 different countries participated in the event, which brought together the fleets of the Extreme Sailing Series and the GC32 Racing Tour. After an exciting duel with the Danes from SAP Extreme Sailing Team, the Swiss Team Tilt was crowned the champion, beating 12 teams to claim the coveted title.

While the spectacle of these foiling boats was once again exceptional, the usual windy conditions on Riva del Garda lake were not so constant. The South wind, known as the Ora, was at times light and the crews had to adapt to the quickly changing conditions. On his first regatta of the 2018 season, Franck Cammas and Norauto won two races and finished nine times in the top five of the sixteen races started by the race committee.

“I congratulate Team Tilt. The level of racing was extremely high and most of the sailors have come a long way in the last two years. We won some races and we had some good moments, but we also lost a lot of points. Our irregularities prevented us from winning the World Championship, but we won the first event of the GC32 Racing Tour, so the overall result is positive. We have a strong, close-knit team with a visible desire for progress and a steadfast ambition to perform at our best. We are looking forward to competing in less than a month on the second event of the circuit in Lagos,” said Franck Cammas on his return to the pontoon.

Thibaut Derville, General Director of Belgium and Sponsorship manager: “We are proud to have accompanied Franck Cammas and Team France on this first event, and to have taken a lead in the ranking of this circuit which we are a part of. The racing was magical, high level and high flying! Our Norauto employees, who are strongly involved in Italy, were able to support the team during these four days and have a great experience. The next event is fast approaching, and we will be there, ready to give it our best.”

“We have started well, and we are on track. There is still a slight disappointment because we were hoping for a better result at the World Championship. We performed well in the manoeuvres, we had a good speed and the boat is perfectly fine-tuned. But we have to work to progress in certain configurations, in the trim of the boat downwind and in the management of the race. It was the first of the season, so it was somewhat expected. For the rest of the championship, we will have to do better,” concluded Jean Christophe Mourniac (Kinou), the team coach. 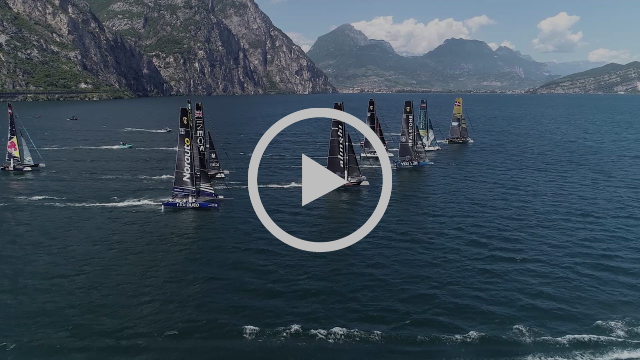 Winner of the GC32 Racing Tour in 2016 and expert in multihulls, Franck Cammas and his team will take part in the remaining 4 stages of the 2018 foiling catamaran circuit. If the team are aiming for their best possible result on this Racing Tour, a number objectives on board the GC32 Norauto remain: being competitive on this type of boat and perfecting flight, keeping the team at a high level, and continuing to work to improve cohesion with the ambition of participating in the 36th America’s Cup.